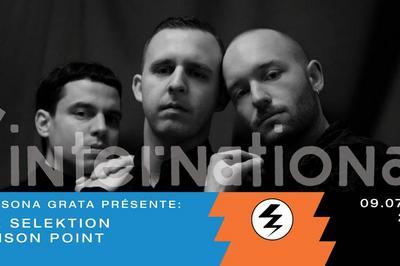 DIE SELEKTION is a breath of fresh air in the dusty and often narrow minded world of dark electronic dance music. Maybe their youth is the secret to their self confidence and fearless approach, they overcame their idols easily and present the best possible and modern emancipation from giant groups like DAF, NITZER EBB or FRONT 242.

Since their formation, DIE SELEKTION gained a lot of reputation with sold-out releases and numerous live-performances all over Europe and Russia. Their powerful and sweaty Prosecco-infused live-shows helped them to quickly grow from an insider tip to a live-act to be reckoned with. After the highly anticipated release of their very first and self-titled album in 2011, a lineup change, their long-awaited and grown-up successor ?Deine Stimme Ist Der Ursprung Jeglicher Gewalt', various Singles, Remixes and collaborations - the band is now working on new material again, to be out in 2022.

The new innocence?, DIE SELEKTION's self description, is the first of many

enthralling contradictions raised by the band. Fast beats, cutting bass lines, bleak and subcooled synth layers, the coldness and dominance of German lyrics and then - the last thing you would expect: a trumpet. The plain brilliancy of how this works out leads

to one question only: Why has no one done this before? It doesn't happen often that a new, young act finds such a good reception like these fledging boys from Southern Germany. Already their very first demos caused a lot of attention and euphoria - a rare